ESP2020:  THE VARIETIES OF MAGICAL EXPERIENCE

In Search of the Supernatural

BY NIGHT: paranormal investigations  – explore both the Crescent and Basin Park Hotels from midnight to dawn,  in the company of  veteran ghost hunters.

BY DAY:   explore your own extra-sensory perceptions! through telepathy testing, a psychomanteum –  and more!

1886 Crescent Hotel, with excursions to the Basin Park Hotel Eureka Springs, Arkansas – the “Miracle City in the Ozarks.”

(based on Double occupancy) for two night stay!

(based on Double occupancy) for two night stay!

Please note: these exceptional rates are only available to conference attendees – reserve early!

Built in 1886, the Crescent Hotel in Eureka Springs has become famous for its ghosts.  WATCH 40/29 VIDEO 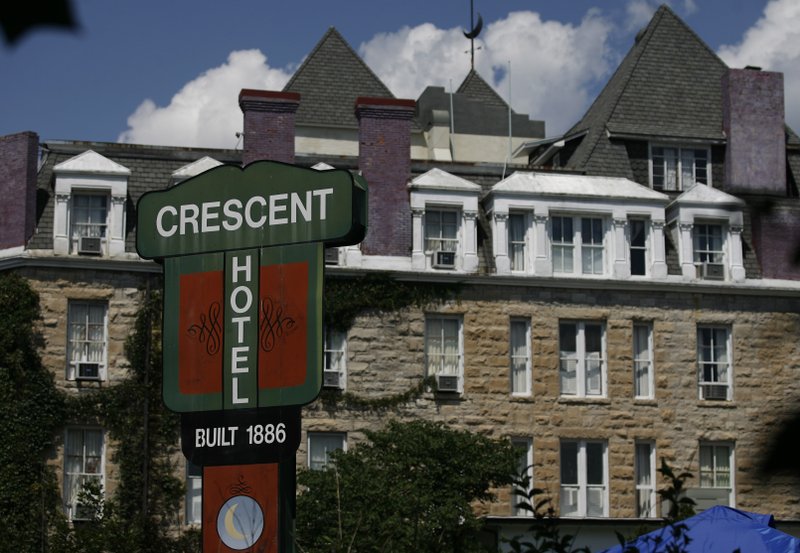 It’s the month when green forests slowly turn orange, yellow, and red, culminating with ghosts, ghouls, and all things scary.

So it’s only right that the historic 1886 Crescent Hotel and Spa in Eureka Springs is being featured in October on another TV documentary as America’s most haunted hotel.  Read More…

As part of our Do The Ozarks Halloween series, The Arkansas CW Crew went back this year to the famous haunted hotel The Crescent Hotel.  Built in 1886, the first 15 years it served the carriage set and was an exclusive year-round hotel resort.  During our tour, we had a chance to go into Theodora’s room, Michael’s room, and the Morgue.  Read More…

“America’s Most Haunted Hotel”, the 1886 Crescent Hotel & Spa, is suddenly moving to “world’s most haunted hotel” status thanks to the soon-to-air episode of the Global Photo Association Tokyo, Inc. (GPAUS) program for Fuji Television Network in Japan.  The program, “What Is This Mystery” was shot on location at the hotel in May of this year and captured some unexplainable moments.

The founder of Paranormal Inc., Rich Newman of Memphis TN, who has been investigating the paranormal for more than ten years, appears on the program.  He shared these experiences with hotel management, “I don’t know if the television crew spoke to you after our night monitoring Theodora’s room (Room 419), but we had quite an exciting night!  While monitoring our subject sleeping in that room, several lamps turned themselves on and off.  First it was a floor lamp in the couch/TV area.  Then it was the nightstand lamp right beside the bed.  While we were marveling over the bedside lamp switching on and off, the closet door in the room opened all by itself!  What’s better, this all happened on camera!”

The Fuji Tv show makes the sixteenth paranormal program produced featuring the Crescent Hotel in the last dozen years.  The most recent is an episode of the Travel Channel’s “Most Terrifying Places in America” which recently debuted.

Some of the most haunting Crescent stories to emerge in 2018 are those recounted the hotel’s ghost tour guides.  Here are a few:

> At the conclusion of one of our nightly tours, two ladies -sisters- stopped me to ask a question.  The blonde-haired lady asked me why I didn’t introduce the gentleman who was sitting in the rocking chair during my opening remarks in the hotel’s history room where we start each of our tours.  I looked at her and told her there was no one sitting in the rocking chair.  Her sister laughed and said, “That’s what I told her!”  The blonde sister went on to say that he was wearing a three-piece brown suit and a rounded hat, and that he smiled, laughed and rocked all during my opening comments.

> One night in the morgue (which is located in the hotel’s basement, used as such by Norman Baker during the time he operated a ‘cancer curing’ hospital in the Crescent during the late 1930s), I had just brought my tour in and they were beginning to sit in the front area.  Out of the corner of my eye, I saw a man high-stepping into the autopsy room.  He wore a dark suit and top hat.  I excused myself and went into the room, looked around and even opened the meat locker (where Baker stored cadavers and body parts), but there was no one there.  However, I saw him as plain as day.  The hair on the back of my neck stood up and I had goose bumps.

> While supervising one of my tours, I was standing against the wall across from the SkyBar located on the hotel’s fourth floor when, to my left, I saw an orange-striped tabby cat at the end of the hall.  I walked down to that area, looked left and right but there was no cat.  I just knew it was Morris, the hotel’s orange-striped tabby cat for 21 years from 1973 to 1994 and is buried -complete with headstone- in the hotel’s East Lawn garden, was paying us another visit!  (Note: a cat-like entity is often “felt” in the hotel’s lobby rubbing up against a guest’s leg or jumping into a guest’s lap right below the Morris’ memorial poem and photo.)

> One night this summer, I had a full ghost tour of 24 people seated in the entranceway of the morgue.   As I stood up to make my presentation, I heard distinct footsteps in the autopsy room which was just down the short hallway from us.  It sounded like someone was pacing back and forth.  I had an eerie feeling that it might be a ghost and that I was the only one who was hearing the footsteps.  A few seconds later as I was presenting the story of Norman Baker, I noticed that no one on the tour was listening to me; they seemed distracted.  So, I paused and asked the group, “Do you hear footsteps?”  They all nodded in unison.

While the Crescent’s ghost tour guides capture many stories, guests are also encouraged to submit experiential stories and photos on the “America’s Most Haunted Hotel” Facebook page.  Many of these photos include orbs that paranormal theorists contend contain the energy of one or more ghosts or entities.  Here is one such account:

>I captured a lot of different orbs on my phone’s camera but I had one orb, seen by my naked eye, basically like kind of attack me.  It came from across the room down in the morgue and zig-zagged at me then flew behind me.  It made me feel very uncomfortable, plus I got super cold.  A few seconds later, it appeared again, coming from behind me, traveling back across the room straight at me.  However, this second time, it stopped and was just like hovering in front of me as if it were checking me out, eventually disappearing.  What they say about the morgue being (paranormally) active is true indeed.

“The best thing about our mountaintop spa resort is that it is a Historic Hotel of America best known for weddings, romance travel, and a family gathering place,” explained Bill Ott, the hotel’s director of communications. “And, oh by the way, the 1886 Crescent Hotel is also said to have ghosts or what we like to call, ‘guests who check out but never leave’.  Our haunted persona is just another avenue for creating lifetime memories.”

Back by popular demand, Paranormal Pair takes you to America’s Most Haunted Hotel, the 1886 Crescent Hotel’s and the 1905 Basin Park Hotel for a two-night stay experience.  Explore the haunted hallways and stories that have stuck around the historic hotels with 2 tickets to the Crescent Ghost Tour where you will venture to the morgue.  On your second night experience the Basin Park Hotel Ghost ADVENToUR where you can experience the adventure of a Paranormal Investigation with the thrill of a ghost tour.  Exclusive access to both the rooftop crows nest and underground cave.

Enjoy a thrilling “Super”Natural Spring Break in One of a Kind Eureka Springs! Here’s a paranormal peek at what’s going on in our haunted historic  mountain town this Spring!

This just in!  Friday evening, January 12th, Dave Schrader, known to listeners all over the country from his Darkness Radio station and his frequent hosting of Coast to Coast, will be participating in ESP18 at the Crescent Hotel. Dave will be giving a keynote speech on Friday evening, January 12th, and also taking part in a round table discussion on Saturday 13th. Look for more details on this website and tune in to Coast to Coast, your nightly portal to the Unknown! We took the ghost tour Thursday evening, which was very interesting!  We also believe we were visited by Breckie.  Ever the skeptic, my husband was awakened by someone pulling on the bed sheets.  He awoke from a sound sleep from the tugging and because of the chill that he felt run up his spine.  This was around 1:00 or 1:30 a.m.  After we had settled down and fallen back asleep, I felt the tugging of the bed sheet at the end of the bed.  The first time it occurred, I thought it was my imagination because my husband had mentioned it.  The second time I thought, ‘now that’s not my imagination’.  The third time, I drew my legs up and drew the covers closer to me and it stopped.  Just as I was falling back asleep, something began pulling on the end of my long hair.  I also then experienced a odd chill up my spine.  It occurred two more times, until I wrapped my hair into a twist and placed it under my neck.  Then it, too, stopped.  An experience we will never forget!
With much thanks and warm regards,
Michelle & Tom Montgomery